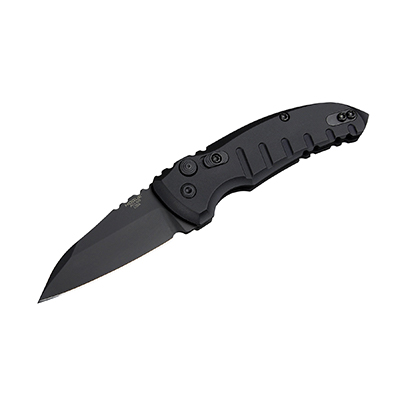 Wharncliffe is the name of a blade with an exceptional shape often called an "inverted regular blade". Wharncliffe blades are relatively short, exceptionally thick and very sturdy.

The design and name of the blade harkens back to Lord Wharncliffe, the proprietor of the knife factory of Rodgers & Sons in Sheffield, England. He wanted to create a blade unlike all other common blades of the early 19th century – not narrow but broad and able to withstand even the most intense stress and strain. The result of his efforts was the Wharncliffe blade, which was later given his name and which was first produced in 1832. While a regular blade has a straight spine and an edge that curves towards the point, the Wharncliffe blade is just the opposite: It has a curved spine and straight edge.

The spine of this blade type is slightly convex, sloping down from its apex halfway along the blade towards the point. The point of a Wharncliffe blade is highly accentuated. Apart from this basic shape, there are other variations of the Wharncliffe blade in which the edge is not entirely straight but has a slight belly toward the point The Wharncliffe blade is often confused with the sheepsfoot blade. Both blade types might look similar at first glance but possess some important differences. Sheepsfoot blades also have a curved spine and straight edge, but their spine is not convex and does not slope down sharply towards the point.

The specific geometry of a Wharncliffe blade determines its main areas of application. The blade is very well suited for all rough carving and cutting tasks. With its fine point, the blade is also able to handle precise cuts, making pulling cuts particularly easy.