The basics of steel science

Freely after Goethe: Steel is a very special juice! And it is precisely this juice that is the core of every knife. Come along to the juice bar and discover what makes a good knife steel.

The knife is the oldest and, according to many experts, also the most important tool of mankind. It may seem simple, because what do you do with it except cut? But if you look closely, you realize what a versatile and complex tool it is. Its functionality and the best possible use are based on numerous properties.
For example, the cross-section of the blade, the so-called blade geometry, has a decisive influence on the cutting ability of a knife. A finely ground knife cuts many materials more easily than a relatively coarse knife, which in turn is more resilient. The contour of the blade, in turn, is related to the best possible application. And the handle design significantly determines the possibilities of power transmission as well as working comfort and operating safety.
The core of every knife, however, is the blade steel. It is responsible for how sharp you get a knife, how long the knife keeps its sharpness, how stable the blade is, how well it resists corrosion and which sharpening products you need for resharpening. Currently, well over 100 different types of steel (alloys) are used to make knife blades. Some differ only in nuances, while others are worlds apart in composition and manufacturing processes.
The simplest knife steels - which are not necessarily bad - consist of iron and small amounts of carbon. The most complex ones require powder metallurgical production processes for their manufacture and exhibit mixing ratios of iron, carbon and other alloying elements such as chromium, vanadium or tungsten that would have been unthinkable in the past, thus enabling new properties.
Depending on the type of knife and the area of application, the focus is on various properties that can be achieved with the help of a suitable steel alloy and its correct heat treatment - it is more than tipping the scales. These properties include edge retention, toughness of the steel, sharpenability and rust resistance.

This refers to how long a knife remains sharp and usable. The main factors are hardness and wear resistance. A hard steel does not fold over as easily as a soft steel when stressed along the cutting edge. How well the cutting edge resists mechanical abrasion has primarily to do with the presence of carbides. These steel components are significantly harder than the hardening structure surrounding them. Their size - which varies from 0.0005 to 0.04 millimeters depending on the steel alloy - limits a steel in the minimum fineness with which one should apply the cutting edge angle and thickness. Only if the carbides are firmly anchored in the surrounding steel matrix can they not break out of the structure and do their work. This is also known as microstability. The carbide structure has much less influence on the overall breaking strength of the blade.

Steels with high toughness withstand chipping, cracking or fracture caused by mechanical loads such as impacts or bending stresses for longer than steels with lower toughness. A particularly fine steel structure without carbides or with only a few, as evenly distributed and small carbides as possible, as well as a non-aggregated hardness spectrum are advantageous for high toughness.

How easy it is to sharpen a blade has a lot to do with the wear resistance of the steel. The more resistant a steel is to abrasion, the longer it naturally takes to sharpen it. Special demands are then also made on the abrasives. Some steels can only be handled with ceramic or diamond-coated abrasives.

Rust occurs when steel oxidizes with oxygen under the influence of water. This corrosion is intensified by salts and acids and does not stop, but eats deeper into the steel. Initial performance losses occur when the fine cutting edge, which is only a hundredth of a fraction of a millimeter wide, is affected by corrosion. Protection against rust attack is provided by a superficial, very thin oxide layer that can form during heat treatment, provided the steel contains a sufficient chromium content of around 12 to 13 percent. The decisive factor is that the chromium is dissolved in the matrix and not already bound in carbide form.

For a large shark knife with which you want to fight your way through the jungle for a year, mechanical resilience, i.e. toughness, and ease of sharpening should be in the foreground. A knife that can be refreshed at any time with special sharpening accessories or that is used to cut highly abrasive materials such as cardboard or sisal rope benefits from high wear resistance and edge retention. Many knife users who work in humid environments appreciate high corrosion resistance.
However, these four essential characteristics are not fully compatible with each other and cannot be found together in maximum form in any known knife steel. However, there are many good steels with well-balanced properties. Knowing their respective peculiarities is interesting, which is why we break down some of the most popular steels in detail. Despite their differences, they have all proven themselves in use, in some cases for decades. 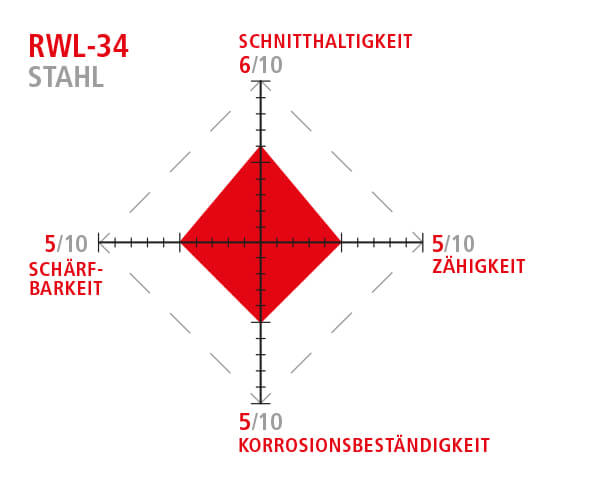 RWL-34 is produced by Damasteel from Sweden. The steel is similar in composition to the American 154-CM/CPM-154, but RWL-34 is produced by powder metallurgy, which makes it possible to reduce the carbide size and achieve a more homogeneous distribution. This has a positive effect on sharpenability and toughness. The maximum hardness is 64 HRC, but it is usually hardened to around 60 HRC. RWL stands for Robert Waldorf Loveless, a famous US knifemaker. Recommended cutting edge angle: depending on use, from 30 degrees. 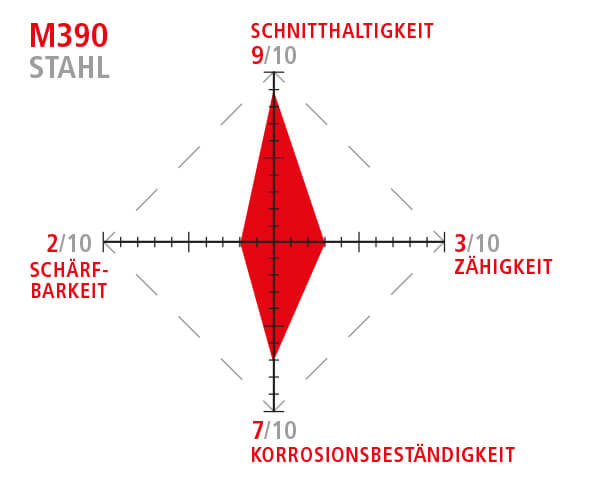 M390 Microclean is a powder-metallurgical martensitic chromium steel and is produced by Böhler (Voestalpine). Industrially, the high-alloy steel is used, for example, in the manufacture of injection molding dies, which must retain their exact shape after thousands of uses. In the knife sector, it is mainly used for high-end knives, whose blades it helps to achieve extremely high wear resistance and high corrosion resistance thanks to its alloy design with high proportions of carbon, chromium and vanadium. It is mostly used between 60 and 62 HRC and does not tend to burr when sharpened. Recommended cutting edge angle: depending on use, from 30 degrees. 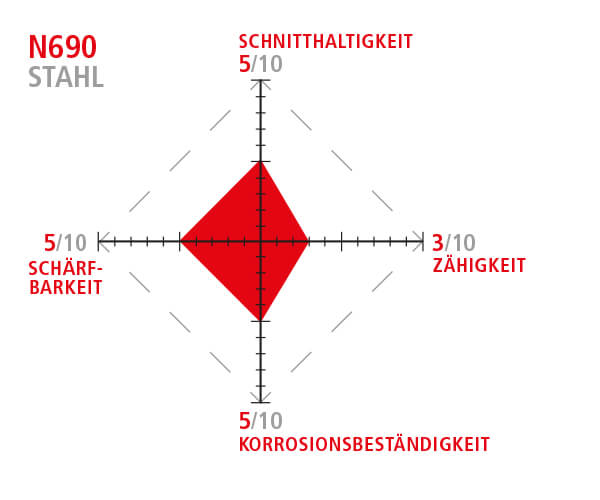 N690 (also known as N690Co) is a rust-resistant martensitic chromium steel with additions of cobalt, molybdenum and vanadium and is manufactured by Böhler. Like the Japanese VG-10, which it resembles, N690 is considered a good all-rounder and is often used in the upper middle class with hardnesses between 58 and 60 HRC. Recommended cutting edge angle: depending on use, from 35 degrees. 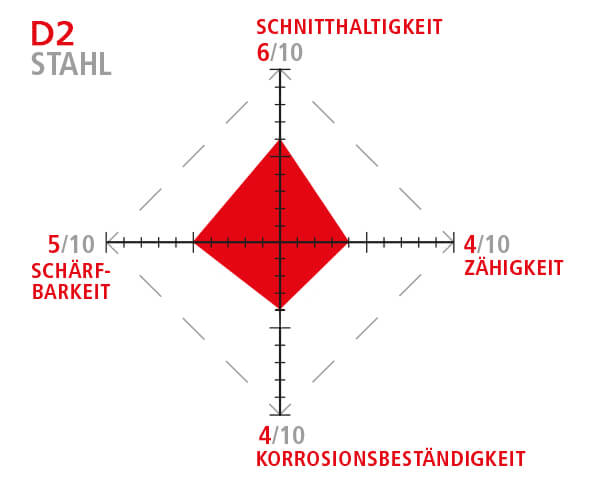 D2 (also 1.2379) is a ledeburitic cold work steel. The highly wear-resistant steel was developed for the manufacture of industrially used dies and punches, cutting, punching and cutting tools, which can also be used to machine thick and hard materials. For many years, however, D2 has also been successfully used for the production of knife blades. The main alloying elements include around 1.55 percent carbon and around 11.5 percent chromium. Due to the high number of chromium carbides, the steel is not considered rust resistant, but only rust resistant. Due to the high number of large carbides, D2 should be used at cutting angles of 40 degrees and above, at least for hard applications. Typical hardnesses range between 59 and 61 HRC. 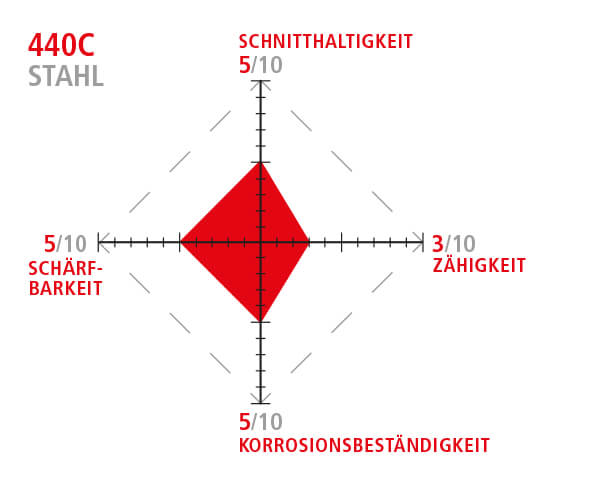 440C (also 1.4125 or X105CrMo17) is a chromium alloy steel with high hardness, wear resistance and good corrosion resistance. It was one of the most widely used steels in the premium sector. Nowadays 440C is often used for inexpensive knives and is also offered in practically identical composition as N695 (Böhler) or 4125 (Thyssen-Krupp). It is used for hardnesses around 59/60 HRC. Recommended cutting edge angle: from 38 degrees, depending on use. 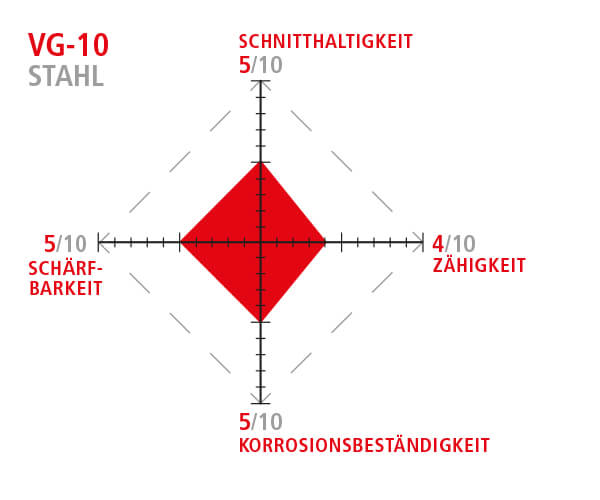 VG-10 is a conventionally melted steel from the Japanese steel producer Takefu. It is very popular with Japanese kitchen knifemakers or manufacturers like Spyderco who regularly produce in Japan. The stainless and cutting steel is used at hardnesses between 59 and 62 HRC. Recommended cutting edge angle: from 30 degrees, depending on the use. 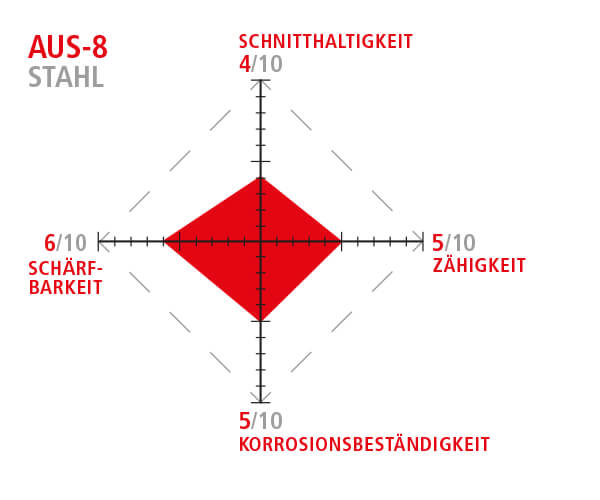 The Japanese stainless steel from the Japanese steel producer Aichi shows a balanced ratio of carbon, chromium as well as smaller admixtures of other elements. AUS-8 has been popular with many Japanese manufacturers for decades. Its heat treatment is correspondingly sophisticated. The "middle class steel" is used at hardnesses between 56 and 59 HRC. Recommended cutting edge angle: from 30 degrees, depending on the use. 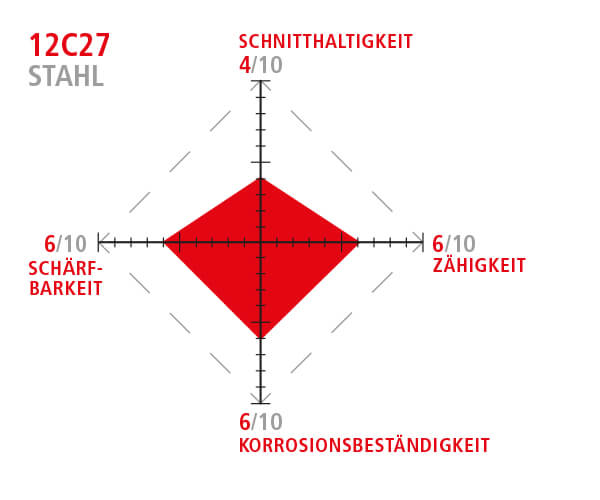 The 12C27 from the Swedish steel producer Sandvik is a well-balanced composed steel with very good rust resistance, which is why it is also used for the manufacture of skate blades, among other things. The moderate alloy composition results in a fine-grained steel that accepts fine cutting edges, is mechanically strong and easy to sharpen. It is popular with Scandinavian and French manufacturers. A powder metallurgy variant is produced by Damasteel as PMC27. The typical hardness range is between 56 and 59 HRC. Recommended cutting edge angle: from 25 degrees, depending on the application. 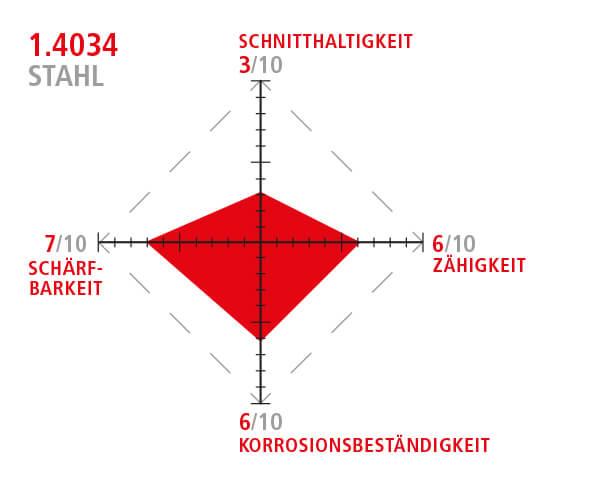 The 1.4034 (also 4034) has a moderate mixing ratio of carbon and chromium and is generally considered a good-natured steel. It has good corrosion resistance, is easy to sharpen, fine-grained and mechanically resilient. 1.4034 is usually used for hardnesses between 55 and 57 HRC. Recommended cutting edge angle: from 25 degrees, depending on the application. 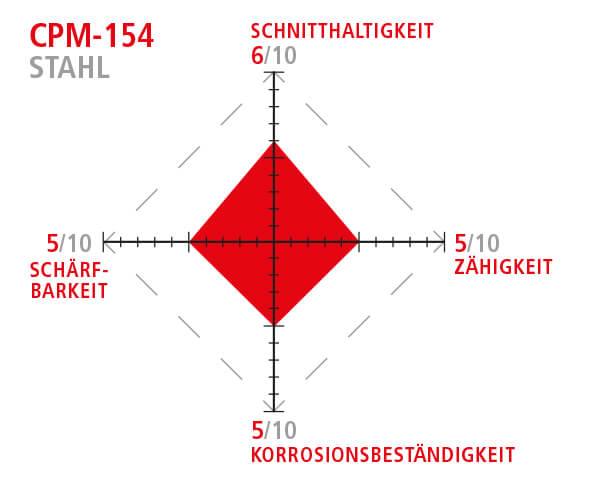 CPM-154 from the US steel manufacturer Crucible was introduced in 2006 and is based on the well-known 154CM steel, but is produced by powder metallurgy. The finer microstructure achieved as a result has a positive effect on toughness and sharpenability. CPM-154 has good wear resistance and corrosion resistance and is often used at hardnesses around 59 HRC. Recommended cutting edge angle: from 30 degrees, depending on the application. 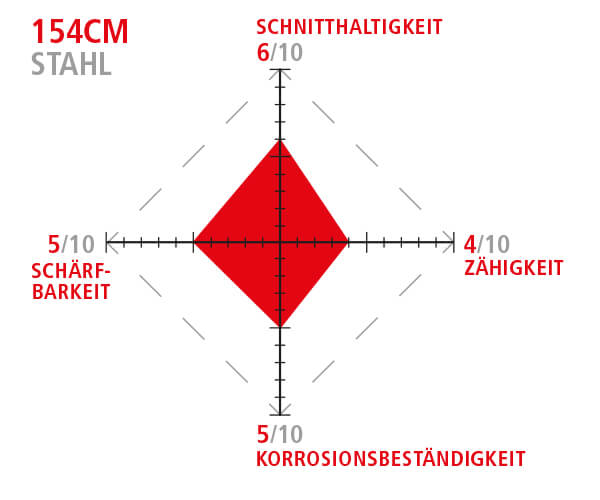 In the early 1970s, the steel manufacturer Crucible launched this alloy on the market. It was intended, for example, for the manufacture of turbine steel engines. Legendary US knifemaker Bob Loveless was one of the first to use 154CM to make rust-resistant and wear-resistant knife blades. When Crucible temporarily ceased production, Hitachi produced an equivalent copy in the form of the ATS-34. 154CM has long been considered a premium steel and is still popular. It is hardened to 58 to 61 HRC. Meanwhile, there is also a powder metallurgy variant. Recommended cutting edge angle: from 35 degrees, depending on the application. 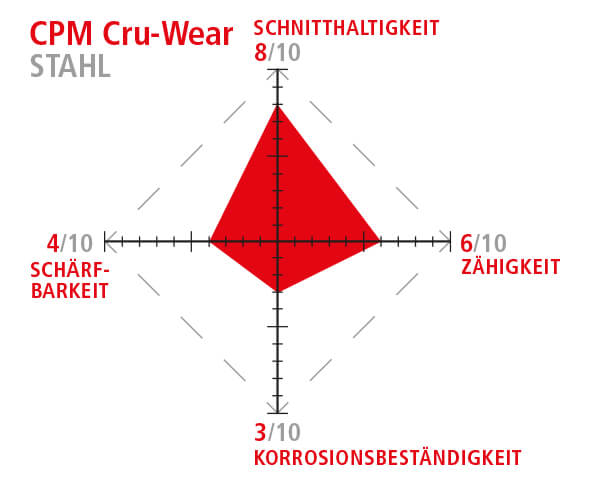 CPM Cru-Wear is an air-hardenable tool steel produced by Crucible. A hardness between 60 and 65 HRC is targeted for knife blades. The steel is considered a powder metallurgy update to Cru-Wear and D2 and is considered significantly more wear resistant due to a higher vanadium content. Due to its chromium content of only 7.5 percent, it is not considered a rust-resistant steel. However, with a little care and careful handling, this is not a problem. Among other things, we use it in one variant each of the classic Trio and Quattro hunting pocket knives. Recommended cutting edge angle: depending on use from 30 degrees. 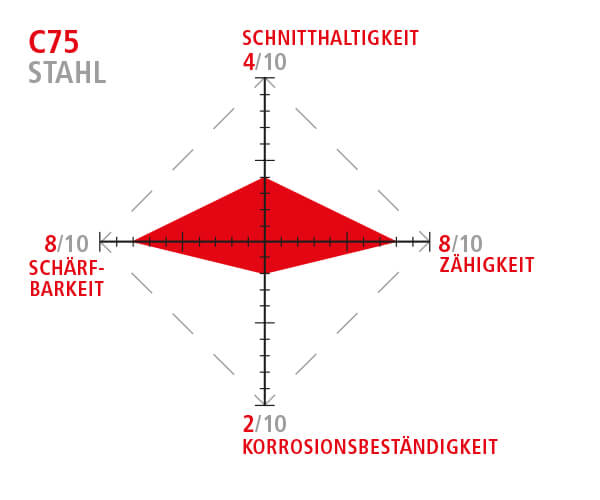 Low-alloy carbon steel is also known as 1.1248, XC75 or 1075. It is a non-rusting steel that is very fine-grained and can be ground to a correspondingly fine finish. It is easily sharpenable and mechanically durable, making it a good choice for larger camp knives. It is used with a hardness between 55 and 50 HRC. Carbon steel like this forms a typical blue-gray patina after only a short time of use due to superficial oxidation processes, which can protect against rust and is not a defect. Recommended cutting edge angle: depending on use, from 20 degrees. 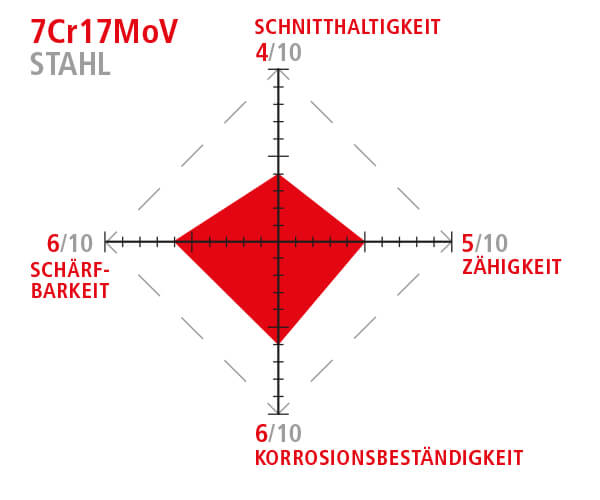 Chinese steel 7Cr17, as the more appropriate name (because additions of molybdenum and vanadium are negligible), is an equivalent of 440A steel. The stainless steel shows a balanced composition with no particular strengths and weaknesses. Recommended cutting edge angle: from 30 degrees, depending on the application.